Over the years we have seen students come and go to our ashrams. We feel lucky to see them grow, to be part of their journey and to see them inspire others. Below we share with you the story of our student Lara Fernández, also known as @Mintyogini. 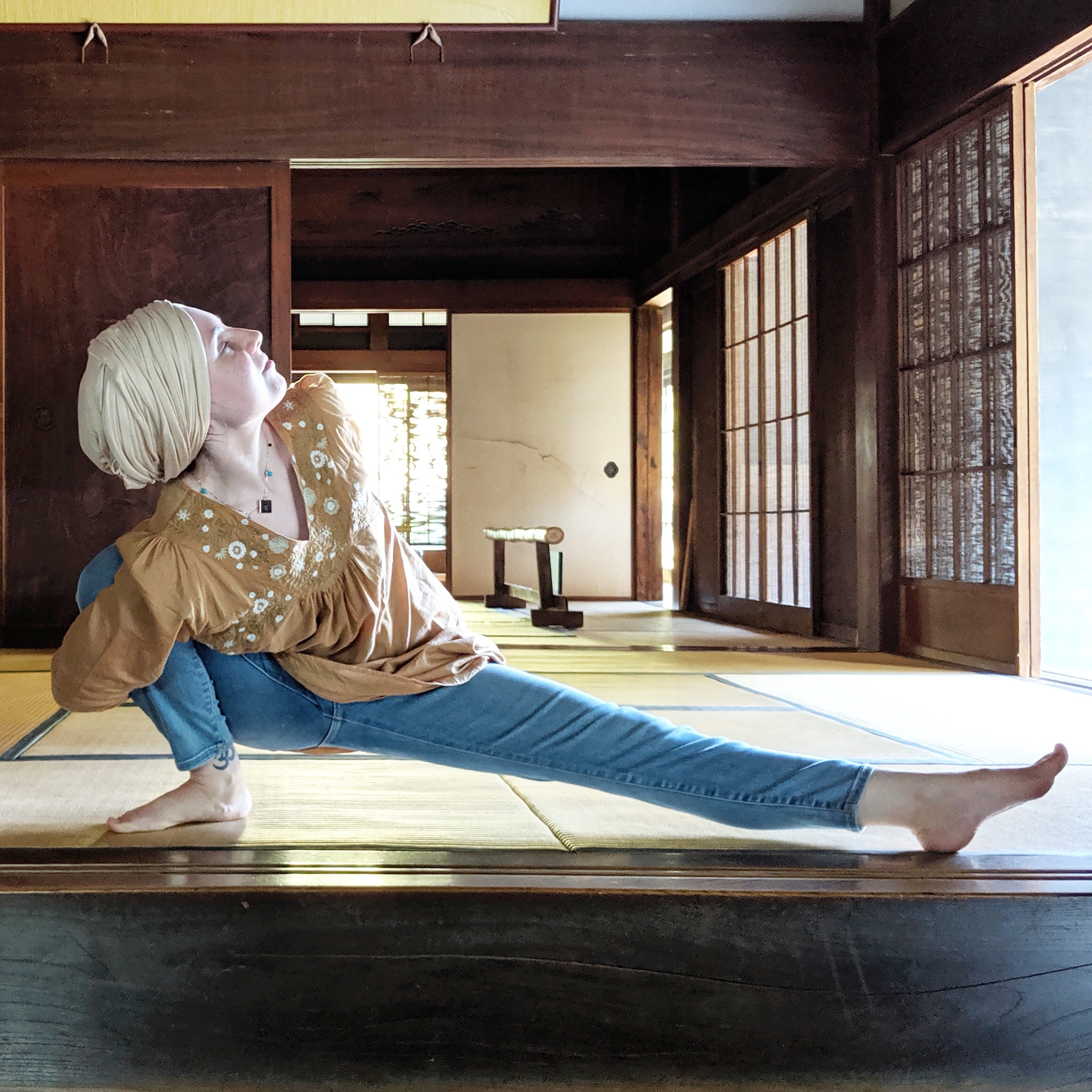 I had never expected that one day I would be living in Morocco — not even in my wildest dreams. Morocco, the land of colors and deserts, camels and spices, and mystery. Such a dreamy holiday destination, and now I found myself standing there. A new home, because home is where you are at any given point, and nowhere else to go. What was I going to make out of this experience?

I finished my 200 hour yoga teacher training in India with Arhanta in early March 2011, and returned to Japan on the 12th of the same month, just one day after the Great East Japan Earthquake. Things as they were, this was clearly not the best time to look for a job as a yoga teacher or launch a new career. Barely two months later, I would find myself landing in Casablanca, where my mother was living at the time, carrying a couple of suitcases and a yoga mat.

I struggled to keep up a regular practice in Morocco, and as life unfolded in unexpected ways —as it always does—  I practically fell out of it for a while until April 2013, when I finally landed a teaching spot at a local gym in Oujda, a small town near the border with Algeria where yoga had never before been heard of. At this gym, I was allotted 30 minutes for my classes, which meant that I really couldn’t teach much. Still, this was my launchpad, the place where I faced the struggles of teaching something from scratch for the first time in rather hostile conditions, and also the joy of connecting with people who found the practice to serve them well.

To provide some background, not only yoga had never been heard of before in Oujda (and to this day no other certified yoga teacher lives in the area, to my knowledge), but this is also an extremely conservative town in an officially Islamic country. The minute I decided to teach at a mainstream gym, controversy was sort of a given.

People questioned whether the practice of yoga might not be haram (unlawful or sinful), as it could be misconstrued as a form of shirk or adherence to other religious practices (i.e. Hinduism). Other people found it ridiculous and, since we didn’t have a private room for the practice, which was to take place in a corner of the same room that houses weight lifting and running machines, they would stare at us and snort when we chanted OM to close the class. To make things worse, the owner of the gym never paid me, so two months after, I grew tired of the situation and left — but not without my students, a few select women who had fallen in love with the practice and who consequently attended my classes for the next 6 years in my own home, at different gyms, and eventually in my own studio, which I had from May 2017 to January 2019, when I relocated to Japan again.

As my own practice, as well as my teaching practice, grew, I became more comfortable to expand beyond the focus of asana and share more and more of the philosophical side of yoga. I had always been more interested in philosophy, anyway, and the study of the different world religious had always been a fascinating topic to me. My students, a group of brilliant women with an outstanding ability to see beyond the seen, would always ask for more, or immediately find similar or parallel concepts within Islam. “We have the same thing in our religion” they’d say, and we’d spend long chunks of the class speaking of concepts such as santosha (contentment) and ishvara pranidhana (surrender). No topic was out of scope, and once I had my own studio, we were free to discuss to our heart’s content, knowing that nobody could come and mock us.

This exercise of exploration would bring it back to me, once and again, that we are all one and the same, and that the unseen Truth behind the things is the same. The practice of yoga would bring us together, and help peel the layers one by own, beyond what is seen, beyond what is named, always bringing us closer to the one unchanging essence, where we come to realize that it doesn’t matter who we are, where we are, or what names we give our beliefs — if we allow yoga in, then we’ll always come home to unity.

My name is Lara Fernández and I’m originally from Spain, though for the last 16+ years I have been living in other countries, including the US, Japan, a shorter stay in the UK, and a dream like yoga teacher training course in India, after which I landed in Morocco in May 2011, only to relocate back to Japan in February 2019.

The name of the yoga studio I owned in Morocco is Chandrini Yoga, and this is also my personal brand. I’ve been practicing yoga since 2009, and I completed my 200 hour yoga teacher training course with Arhanta Yoga in May 2011. I have since also taken an additional 50 hr Yin Yoga training course in 2018.

Subscribe now to receive our series of free e-books

Any cookies that may not be particularly necessary for the website to function and is used specifically to collect user personal data via analytics, ads, other embedded contents are termed as non-necessary cookies. It is mandatory to procure user consent prior to running these cookies on your website.