What is Vinyasa Yoga? 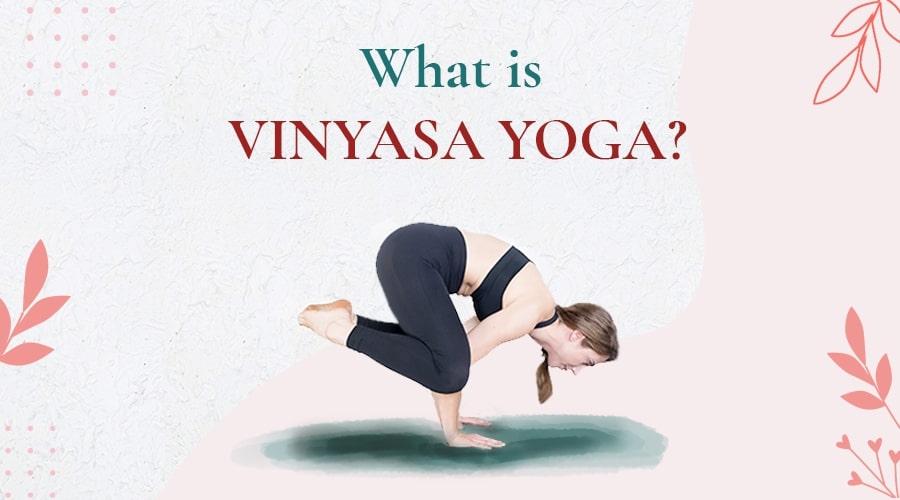 What is Vinyasa or Flow Yoga?

Simple, modern Vinyasa Flow Yoga (also known as Flow Yoga) is best described as freestyle Ashtanga Vinyasa as it doesn’t adhere to the rigid structure of the Ashtanga Vinyasa series set out by K. Pattabhi Jois. It allows for movement from one pose to the next rather than moving through poses statically.

Many Vinyasa Flow classes found at yoga studios follow the basic structure of the Ashtanga Primary Series, starting with Suryanamskara A and B and offering different sequences thereafter. Many classes also closely follow the basic standing sequence of the Ashtanga tradition and the finishing sequence. There are no fixed series of poses. Each class can be different. The basic syntax of Vinyasa yoga allows one to explore a changing syllabus of poses. You can explore poses from the Ashtanga first, second and third series in a more accessible manner than in the Ashtanga Vinyasa series practice.

Where Did Vinyasa Yoga Originate?

Vinyasa Yoga or Vinyasa Flow is not a system and does not follow a clear lineage, hierarchy, or leading guru. There is no official founder of Vinyasa Yoga. Vinyasa Yoga is a modern style of yoga, born out of the Ashtanga Vinyasa Yoga tradition. The Ashtanga Vinyasa tradition, in turn, is based on the teachings of Sri Krishnamacharya. Krishnamacharya taught that the movements between each asana should be considered just as significant as the postures themselves. His idea behind this was to deepen concentration and body consciousness throughout the entire practice. Rather than focusing on “getting into the posture” and then breathing, in Vinyasa Yoga, the aim is to keep the deep breathing and body consciousness consistent throughout all movements during the practice.

Krishnamacharya is considered to be the grandfather of modern yoga. He travelled to the Himalayas in 1916 to learn yoga. There, he met his guru, Sri Ramamohan Brahmachari, and spent seven-and-a-half years with him. During this time he studied the Ashtanga (Raja) Yoga system, also known as the Eight Limbs of Yoga.

In 1933 he began teaching yoga in Mysore, India, and later in Madras, India, to many Indian and Western students. In addition to Pattabhi Jois, his best-known students include Indra Devi, BKS Iyengar, and his son, TKV Desikachar. Influenced by these masters, various styles of yoga have developed from one source, as their representatives were students of  Krishnamacharya at different times. Krishnamacharya taught a diverse practice along with more traditional and original forms of Ashtanga Yoga, in Mysore. In Madras, he changed his style, which ultimately became Viniyoga.

T.K.V. Desikachar (1938-2016) was the son of Krishnamacharya. He believed that yoga should be tailored to the individual's needs. He initially used the term, Viniyoga, to describe his style of Hatha Yoga; later he dropped the term, but not the approach.

Although he spent much of his adult life lecturing and teaching yoga, Desikachar was trained as a structural engineer. He was also the founder of Krishnamacharya Yoga Mandiram in Chennai, India. Born in India, T.K.V. Desikachar was disinterested in yoga as a child and early adulthood. In his 20s, he returned to his roots and studied under his father.

Desikachar first lectured in the United States in 1976 and later visited regularly, teaching and lecturing on his approach to yoga and yogic healing. He believed that yoga could be relevant for all people, regardless of physical capabilities. Adapting yoga practices to meet the needs of each yogi was central to his approach. Through yoga therapy, he integrated the physical practice of asana, pranayama, meditation, and the traditional medical system of Ayurveda to promote overall wellbeing and mental health.

The Ashtanga school was developed by Patthabi Jois. He taught in Mysore, India in the first half of the 20th century. Later Ashtanga Yoga was taught by Jois as moving meditation which he also began to call Ashtanga Vinyasa.

What Does Vinyasa Mean?

The term vinyasa is a combination of two words. Nyasa has several meanings like "to place", “special order”, “attention”, “and vi, which means “specially". Vinyasa has many meanings in the Sanskrit language, however, in the context of yoga, Vinyasa can be best interpreted as

It is often understood as a practice with a theme or purpose consisting of poses linked and associated together.

There are as many versions, sequences, and definitions as there are teachers. Vinyasa Yoga or Vinyasa Flow is not a system. There is no clear lineage, no hierarchy, and no leading guru.

Vinyasa, written in lowercase, usually refers to the progression and continuity between the asanas. Ashtanga Vinyasa Yoga is known for its fluid transitions from one pose to another, or jump-backs and jump-throughs. The most common usage is to define a specific linking sequence (based on the sun salutation -- chaturanga/up dog/down dog) that is coordinated with the breath and gets you from pose to pose. The practice becomes a flow timed to the breath instead of just a series of discrete postures.

The vinyasa gives rhythm to the practice, keeps the heat building, builds upper body strength, and acts as a counterpoise to stretch the legs and re-set the spine to neutral for the next sequence.

Any sequence flowing from asana to asana can be called a vinyasa -- it doesn't have to be related to the sun salutation movements encountered in Ashtanga Vinyasa style practice.

Keeping the concept of moving consciously, "in a special way" in mind a Vinyasa Flow class focuses on relationships between poses and, progressing from simpler to more complex asanas. Teachers also often work with setting an intention and keeping the body-breath-mind connection.

What are the Characteristics of Vinyasa or Flow Yoga

Vinyasa Yoga links one posture to the next through the breath. When the postures are practised together, they flow into each other. This is why it’s sometimes called “Flow Yoga”. The opposite of Vinyasa Yoga is the more classical style of yoga such as Hatha Yoga, where students come into an asana, steadily stay in the pose and then “break the posture” by coming out.

The transition from one asana to the next is always initiated from the breath. The breath might become deeper and more strained due to physical activity, but ideally, it should remain regular and through the nose. The breath creates the rhythm and timing that underlie the linking of the postures. Krishnamacharya used to travel from town to town giving yoga performances with his students. To have them move in synchrony, he instructed them to breathe deeper and with a slight construction in the throat. This is commonly called 'Ocean Breath' or 'Ujjayi Breathing'.

Vinyasa Yoga is a Cardiovascular Work-out

A Vinyasa Yoga practice usually involves intense movements and generates a cardiovascular work-out not always present in other forms of yoga asana practice. This is in contrast to classical Hatha Yoga principles in which we aim to keep the heart rate at a resting pace so that we stimulate more subtle processes in the physical body (the endocrine system, the lymphatic system, etc.).

The Variety of VariationVariations in Flow Yoga

A defining characteristic of Vinyasa Flow classes is the variation in sequence from class to class. No two classes are alike. If you have done a Vinyasa Yoga class at your yoga studio, you may have noticed this. This stands in stark contrast to fixed form systems such as Ashtanga Vinyasa Yoga and Bikram Yoga.

Vinyasa Yoga is  a Moving Meditation

Vinyasa Yoga, due to its intensity and variety requires intense focus. The practice can bring you into a state that can be described as moving meditation.

What to Expect in a Vinyasa Yoga Class

A Vinyasa Yoga class is different from a Hatha Yoga class. Generally speaking, a Vinyasa Flow class is challenging in that it is focused on continuous deep breathing, and constantly evolving as your practice deepens.

The Sun Salutations from the Ashtanga Vinyasa tradition form the backbone of a Vinyasa Flow Class. The Surya Namaskara A and B are used in their "pure" form to warm up the body, and then they are used as a red thread throughout the practice to weave in different asanas and exercises.

Instructions for Surya Namaskara A 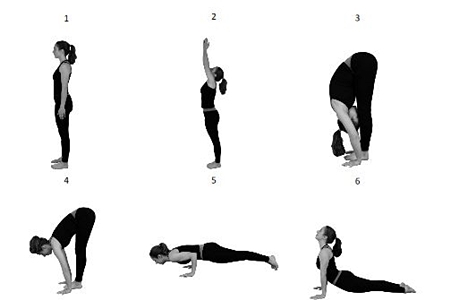 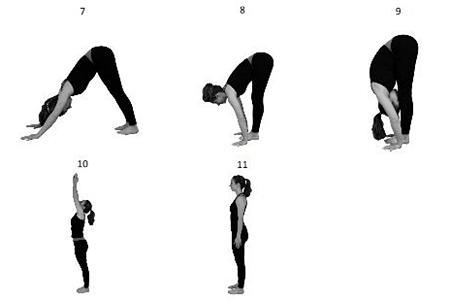 Instructions for Surya Namaskara B

When telling students to "take a vinyasa", the teacher asks them to transition from one asana to the other by doing the sequence of:

When coming out of a seated asana, the vinyasa includes:

This is the traditional Vinyasa, as taken from the Ashtanga Vinyasa Practice by K. Patthabi Jois.

There are numerous ways to create variety with the vinyasas as well as within Surya Namaskara A and B, for example:

Replace Utkatasana (In Surya Namaskar B) with:

Replace Virabadhrasana I (Surya Namaskara B) with:

4. Counting the Breaths in Vinyasa Yoga  and Ujjayi Breathing

During the first part of the class (before we sit down), we count our breaths. In most Vinyasa Yoga classes the teacher counts the number of breaths that students should hold the pose. Usually, that is 5 breaths per pose.

Slow and controlled breathing is commonly referred to as Ujjayi Breathing or Ocean Breathing. It is technically not the proper (classical) Ujjayi Pranayama, but a Full Yogic Breath. While breathing deeply, to produce the "ocean noise," slightly restricts the opening of the throat to create some resistance to the passage of air. Gently pulling the breath in on inhalation and gently pushing the breath out on exhalation against this resistance creates a well-modulated and soothing sound—something like the sound of ocean waves rolling in and out.

Read more: The Difference Between Pranayama and Breathing Exercises

How to Teach Vinyasa Yoga

Teaching Vinyasa Yoga can be relatively easy and quite challenging. It depends on how you choose to teach: Do you prefer to mainly stay on your mat and physically demonstrate most of the poses and exercises, while explaining the flow? Or, do you choose to keep walking around and verbally guide your students through the practice?

In the first scenario, it is rather easy to teach, once you know the flow of the sequence well. However, you won't be able to see your students well and you won't be able to adapt your class to their needs and level. Teaching Vinyasa Yoga while still being in a position to observe, adjust and adjust is a more challenging feat and takes practice.

It is our deeply rooted conviction here at Arhanta, that to grow as a teacher and truly serve your students your full attention should be on the student. Being attentive to your students and observing them will make the difference between them returning to your classes over and over again. Rather than practising at home with a video, this is a more effective method. And, it makes teaching so much more interesting, exciting, and enlightening!

Also read: How Much Experience Do you Need to Become a Yoga Teacher?

Kalyani Hauswirth-Jain is the Creative Director and a senior teacher at the Arhanta Yoga Ashrams. Prior to joining Arhanta Yoga Ashrams in 2011, Kalyani studied Modern Dance in the Netherlands where she discovered her passion for the body-mind connection and personal leadership. In 2007, Kalyani began teaching yoga professionally, and four years later, she was training yoga teachers at our ashrams.

Now with over 11000 hours of teaching experience, Kalyani is a lead teacher for the 200- and 300-hour Yoga Teacher Trainings, as well as a number of 50-hour courses at the Arhanta Yoga Ashrams. When she’s not adjusting postures in class, Kalyani is writing informative blogs and guides for fellow yogis, and co-authored the critically acclaimed book, 'Hatha Yoga for Teachers & Practitioners.'

How to Teach Vinyasa Yoga for All Levels: Essential Guide

The Ultimate Guide to Yoga for Strength and Flexibility