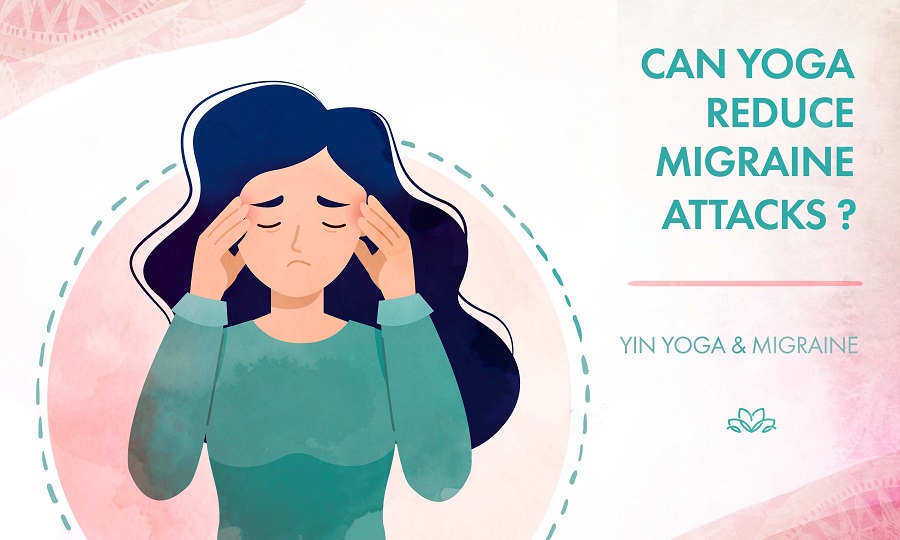 Migraines are pretty common, and it is thought that they affect anywhere between 10% to 20% of the population. [1]

Clinically if a person ever had five or more attacks of headache lasting for 4 to 72 hours, then he or she may be diagnosed with migraine. A migraine headache is commonly pulsating or throbbing, but not necessarily. It may or may not be related to any physical ailment.

It is challenging to define the cause of migraine. Years of research have failed to explain the precise cause of these headaches. There are a number of theories. In the early and mid-twentieth century migraine was thought as a disease of blood vessels of the brain due.

However, the latest thinking is that it is a more severe neurological condition, characterized by changes in the brain. It is now rather compared to a disease like epilepsy.

Read more about: Yoga & Epilepsy – What You Should Know

It is believed that migraine is a genetically induced hypersensitivity involving neurons (brain cells) located within the central nervous system. If a genetically primed neuron is triggered by a change in the external environment (for example a drop in barometric pressure) or internal environment (for example a sudden drop in estrogen level), that neuron may activate. As a result of this activation, it triggers its neighboring neurons to join. This chain reaction induces the pathways in the brain that normally conduct head pain to awaken and produce the familiar symptoms of a migraine attack.[2]

In one of the clinical trials, 30 participants practiced yoga along with conventional treatment, and another 30 just took only medication. Those who practiced yoga for five days a week felt much better at the end of six weeks trials. Therefore, researchers concluded that yoga deserves a prominent place in migraine therapy.[3]

A critical review  based on 29 medical studies, conducted in 2015, found out that there is moderate evidence from randomized control trials that yoga may help with migraines. It may do so through its calming effect on the mind, by helping a person relax better, helping overcome anxiety and depression, and thus reducing the episodes of migraine. This critical review concludes that much more research is need in order to make conclusive statements. [4]

Other research shows that yoga  is suitable for brain health, and may help both in neurological and psychiatric conditions. In most such conditions it is recommended as an add-on treatment. In a major literature review, published in 2017, researchers analyzed all the research articles regarding the benefit of yoga in neurological conditions like dementia, epilepsy and so on, written between 1963 to 2016. They conclude that there is overwhelming evidence for support of using yoga in neurological diseases.[5]

Similar results were noticed in a literature review regarding the benefits of yoga in various psychiatric conditions. The study found that although yoga was not the main component of treatment, it surely seems to have a role as a complimentary therapy. There is clear evidence that it may help both with neurological and psychiatric conditions.[6]

What can we conclude regarding the benefits of yoga in migraine?

Firstly, there is a need to understand that migraine is a complex neurological condition with psychiatric symptoms like changes in mood and emotional responses. Yoga has long term benefits in both conditions; thus, it will help reduce the severity and intensity of migraine episodes. Present evidence seems to suggest that yoga should be used along with conventional therapy for maximum benefit.

Some yoga classes involve a lot of heat or are very vigorous. Generally speaking, yoga students with a history of migraines should (at least initially) avoid these types of classes. Some patients have found that too vigorous exercise or yoga classes can actually trigger migraines. Gentle yoga that focuses on breathing and meditation are ideal, while moving the body in varied positions are recommended.

2. Understand the breath and its role

The essential principle of yoga for migraine patients begins at the breath. Slow, even, and deep breathing calms the nervous system, relaxes the muscles, and reduces pain. On the other hand, shallow, stressed breathing causes muscles to cramp up and pain to increase.

During a migraine attack, deep breathing techniques can reduce pain. Deep and conscious breathing is an important ingredient in yoga classes and can be practiced whenever or wherever to calm the body and lower blood pressure.

3. At the onset of migraine, these 3 calming postures can help:

There is growing evidence that prolonged and regular practice of yoga may significantly reduce episodes of migraine. During acute phases, it may be practiced along with conventional treatment. When practiced regularly, yoga may help prevent incidents of migraine even without any medications. Therefore if you are suffering from migraines yourself or some of your yoga students are, the advice is: Keep practicing yoga! Choose the yoga style carefully and keep a close eye on the pattern of migraine attacks.