Why You’ll Live Longer and Better with Breathwork & Pranayama 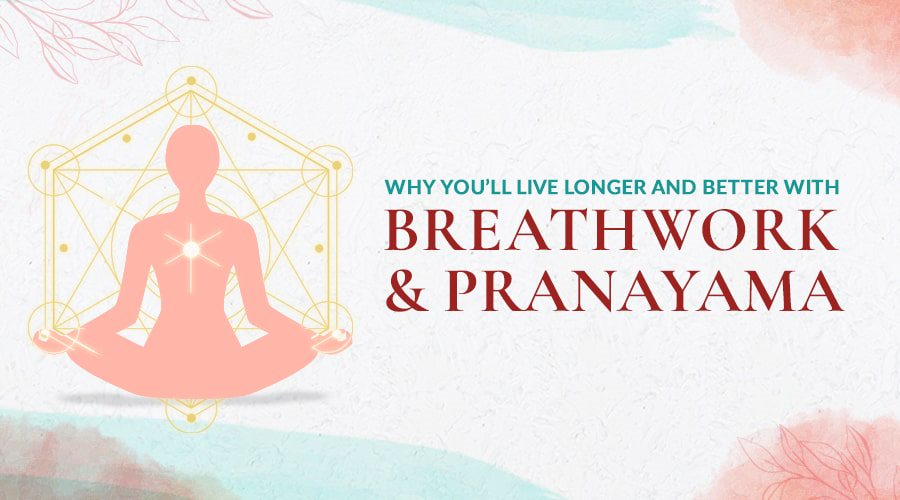 Prana means life-force. This energy flows throughout the body. Using breathing techniques is a means to increase this life-force energy. Some 5000 years ago, eastern medical practitioners propagated that Pranayama which uses control and modification of the breath (practiced safely and with purpose) did wonders for health and well-being. Today, the benefits of pranayama are backed by medical science. Pranayama, with yama meaning control, uses specific breathing techniques to positively impact bodily systems and functions such as cardiovascular functioning, blood circulation to the brain, as well as metabolic and endocrine activities. Read on to find out more on how pranayama breathing techniques can help better and prolong your life!

On a cellular level, the body needs oxygen-rich blood to function and create energy. Oxygen is carried by the blood in two ways. Firstly, by oxygen attaching to haemoglobin. Secondly, the rest is dissolved in the plasma. Plasma serves as the liquid base for the entire body. It carries water, salts and enzymes. It transports nutrients, hormones, and proteins to the parts of the body that require it.

Research has shown that pranayama deep breathing exercises focused on the lower part of the lungs maximises the absorption of oxygen. By using a breathwork technique whereby we slow down the breath, our inhalations become longer and fewer, achieving more oxygen levels. Conversely, breathing shallowly only engages a fraction of our lung capacity. Stagnant air then pools at the bottom of the lungs compromising our oxygen-rich inhalations.

So, how can we increase absorption via breathwork techniques? It helps to understand a process called diffusion. Via diffusion, oxygen moves from the lungs to the blood. Once O2 is in the bloodstream, it attaches to haemoglobin (a protein in your red blood cells) in red blood cells. The process of diffusion is quite incredible, as we inhale, oxygen moves from the alveoli (tiny air sacs in your lungs) to the blood through the capillaries (tiny blood vessels). Once oxygen is in the bloodstream, it gets picked up by the haemoglobin in red blood cells. This oxygenated blood then flows back to the heart. The heart pumps this oxygen-rich blood through the arteries to every cell in the body and brain! This is why the breathwork techniques of pranayama are so beneficial to use for increasing lung capacity. Another advantage of using breathwork techniques is that we can have a tool to help further oxygenate the blood.

Pranayama renews air in the lungs which means a higher level of oxygenated blood is achieved for brain function, immunity and energy release so that we can carry life’s daily activities. Pranayama breathing exercises practiced consistently, can also have a positive influence on one’s mental health. Research shows that breathwork techniques that focus on longer exhalations than inhalations, or a breathing exercise that brings down your breath count per minute, can be super helpful to relieve stress.

Try it for yourself: “Three Yogic Breathing Exercises to Calm Down.”

CO2 is created as a by-product of metabolic activity. It is transported via the bloodstream to the lungs whereby it is eventually removed from the body when we exhale. Carbon dioxide also has a vital role in human bodily functions such as helping to maintain the respiratory drive and maintaining blood ph.

Did you know that most of the carbon dioxide in your body is in the form of bicarbonate, which is a type of electrolyte? Electrolytes are minerals. Examples are sodium and potassium and these are found in the body. Their function is to maintain your body’s fluids in balance. This keeps your body working normally. Electrolyte balance contributes to functions such as muscle contraction, heart rhythm and brain function.

CO2 levels must be tolerated in the body, if not, there can be disharmony in various bodily processes caused by electrolyte imbalance. Carbon dioxide influences the bond between O2 and haemoglobin. Low CO2 content makes the bond between haemoglobin and oxygen so strong so that it is difficult for oxygen to even leave the blood. Bodily cells will then experience a lack of oxygen. Furthermore, an imbalance in CO2 can affect blood pressure, heart rate, narrow the airway passages, our energy levels, heighten our nervous system and diminish our ability to relax or focus.  A pranayama breathing technique such as nasal breathing, and those that require breath retention induce a state whereby the ratio of O2 and CO2 are optimized for overall good health and wellbeing.

In short, the ratio of oxygen and carbon dioxide depends on the proper oxygenation of the blood. It goes without saying then, that pranayama breathing techniques are important for overall health and wellbeing. After all, the fundamental purpose of breathing is to oxygenate the blood!

Pranayama influence on O2 and CO2

Performing breathwork exercises and pranayama breathing techniques has a beneficial effect on the ratio of O2 and CO2. During pranayama we focus on:

By doing these, we condition the body to absorb and process higher levels of CO2 in the blood. The higher the CO2 tolerance of the body, the more oxygen can be released for repair and also for energy! The result is increased blood flow, improved oxygenation of the heart and the brain. This process is called the Bohr effect. It encourages oxygen transportation via haemoglobin.

The Bohr effect is very important for optimal bodily functions. It causes the muscles and tissues to release more oxygen when CO2 levels increase. This helps deliver oxygen to tissue such as skeletal muscle, where it is needed most during metabolic processes.

Breathwork for a longer life

When ventilation is insufficient, the body enters a state of respiratory depression called hypoventilation. There is an unhealthy, imbalanced concentration of CO2 levels. With no intervention, hypoventilation leads to hypoxia where certain parts of the body cannot receive enough oxygen.

However, with knowledge and practice with purpose and safety, breath retention techniques in pranayama can be positive for one’s health. In Bahaya Pranayama also known as  Nisshesha Rechaka Kumbhaka, the breath is held in a safe way over a brief period of time. It brings about a state referred to as ‘intermittent hypoxia’, whereby there are short periods of lower-than-normal levels of oxygen and ‘higher-than-normal’ levels of carbon dioxide in the blood. This state improves memory, lowers inflammation, reduces cholesterol and blood pressure and strengthens the immune system.

Here are some benefits of intermittent hypoxia using pranayama:

As a caution, it is important that if you suffer from any respiratory issues please consult your doctor before practicing any pranayama breathwork techniques. Instead, you can try yoga and pranayama for asthma relief.

Did you know that there is research showing that meditators breathe about 1.6 times slower than the average person? You can imagine the benefits this has on our physiology. According to the ancient Tantric scriptures of Shiva Swarodaya and Gyan Swarodaya, the longevity of a human being is by the number of breaths, not years. By slowing down our breathing rate we can conserve our energy, increase our vitality and longevity.

One of these studies investigated the impact of yoga and meditation on cellular ageing. Within the study, various biomarkers of cellular ageing within the subjects’ blood were considered. A biomarker is an important tool in indicating the health or ill-health of the body. When we visit the doctor and do a blood test or even an X-ray, the results are biomarkers that indicate how the body is functioning and the results are measurable.

Back to the study, one of the biomarkers was something called “reactive oxygen species” which are natural by-products of cellular oxidative metabolism. They play important roles in the process of cell survival, cell death and cell differentiation. Many asanas and associated pranayama in yoga aim at decreasing toxic build-up of reactive oxygen species (ROS) and consequent damages from oxidative stress.  Antioxidants can be described as molecules that fight harmful compounds in the body known as free radicals. When there is an increase in these free radicals in the body, the body becomes vulnerable to illnesses such as cancer, diabetes and cardiovascular disease. What oxidative stress means then, is when there is an imbalance of antioxidants and free radicals in the body. This can contribute to cell and tissue damage. While oxidative stress is natural, the balance or imbalance of it has a direct impact on the process of ageing. It is true that stress is a part of life, however, there are yoga practices to help find stress relief.

Importantly, telomere activity was also considered in this study. The study found that although we cannot change our biology or chronological age we can definitely reverse or slow down the pace at which we age by adopting a yoga and meditation practice in our daily lives, which it goes without saying, that pranayama is an integral part of.  This is the first study to demonstrate improvement in biomarkers of cellular ageing and longevity in an apparently healthy population after a yoga and meditation-based lifestyle intervention. So, our health and the rate at which we age depends on our lifestyle choices. Making yoga and meditation (and it’s breathing techniques according to pranayama) an integral part of our lifestyle may hold the key to delay ageing or ageing gracefully, prevent onset diseases, promote mental, physical, and reproductive health, and prolong youthful healthy life.

Science is catching up to an ancient truth. There is ample evidence that yoga and pranayama breathing techniques have a positive impact on telomeres and other biomarkers and this can slow down the process of ageing, on a cellular level. With this positive impact on the parasympathetic nervous system and telomeres, this means slowed biological and cellular ageing.

Now more than ever, the research is on the holistic benefits of yoga and pranayama are coming to the fore in a significant way. Research affirms these revitalizing ancient practices have a positive and direct impact on the brain and body, and on our well-being.

Learn from expert teacher Ram Jain (ERYT 500) with his 22+ years of teaching experience. Become a certified and confident breathwork & pranayama teacher with our comprehensive online training. After successful completion of the course, you will receive an accredited certificate that allows you to start teaching breathwork & pranayama all over the world. Click here to learn more!

What is Prana? Definition of Prana & the 5 Vital Energies