Sthira Sukham Asanam – Deepen Your Practice with this Ancient Principle 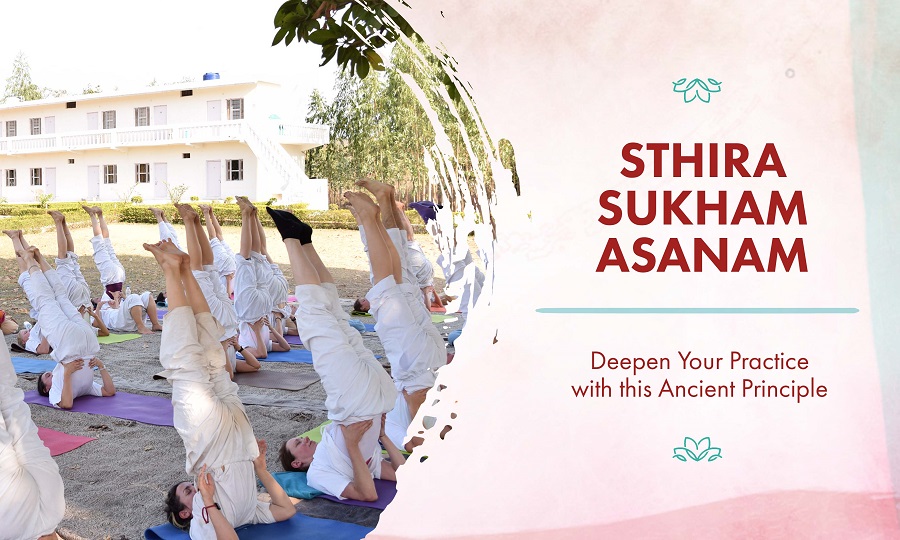 For centuries the sutra (verse) sthira sukham asanam from the Raja Yoga Sutras of Patanjali has been a guide to understanding the deeper nature of yoga asanas. But due to the lack of detailed explanation in the Patanjali Sutras, often teachers relate this verse to only seated postures as preparation to pranayama & meditation. But this verse is just as relevant to all other yoga postures. In fact, this famous verse sums up the entire concept of yoga asanas.

The Origin of the Patanjali Yoga Sutras

The sutra (verse) comes from the widely popular book “Yoga Sutras of Patanjali”, original title “Raja Yoga Sutras by Maharishi Patanjali”. A rishi is an educated monk who engages in reviving, rewriting the old scriptures, and a Maharishi is their head or director. Around 2200 years ago Maharishi Patanjali, together with his team of rishis, compiled a book to provide an overview of Raja Yoga. This book contains 196 verses and gives a brief impression on the practice and benefits of Raja Yoga. Divided into four chapters, in the second chapter (verse 46) we find the famous line: Sthira Sukham Asanam

Why are sutras so vague?

Did you ever wonder why the sutras are so vague?

The simple answer is that they were meant to be vague. The yoga sutras were never meant to provide complete information on Raja Yoga. In earlier times, yoga was a secret and a sacred knowledge. It was only meant to be given to those who deemed worthy by proving their desire for enlightenment and a high degree of discipline and sacrifice.

Therefore, all the yoga books were written to only give a brief overview of the topic. The idea was that if you like the concept, go and find a suitable teacher, prove your worthiness and learn the complete practice from him. The books were carefully kept secret and hidden. Available only through referrals and recommendations.

Similarly, Patanjali did not want to compile a book to give detailed knowledge of Raja Yoga. He only wanted to give a glimpse of it. For example, he only mentioned five Yamas and five Niyamas, whereas there are more than 20 Yamas and Niyamas mentioned in various other scriptures. His idea was to point out what kind of Yamas are practiced in Raja Yoga, not give complete instructions as to which all Yamas are actually practiced. That complete knowledge was to be learned directly from a teacher, not from a book.

The Meaning of Sthira Sukham Asanam

So, the sutra literally states that steady and comfortable is an asana. Often you will read the explanation as ‘steady, comfortable pose is asana.” But here is exactly where the interpretation mistake happens: In the original (literal) translation, there is no mention of ‘pose’ in the definition.

This is because asana is not a pose, asana is a state, state of the body and the mind.

So, moving or holding the body in different shapes is not asana. Otherwise, all gymnasts & acrobats should be considered the most accomplished yogis. When a model is holding the pose for the artist, he is not doing asana.

So, when are you doing asana?

When your body and mind are steady and comfortable even when your body is challenged out of its comfort zone, you are in a state of asana. When your mind gets distracted by senses or body starts to struggle because of its sensations like pain or discomfort, you are not practicing an asana anymore and should come out of the pose.

Mostly while practicing yoga asanas, we are in and out of the asana state. That is why it takes a long time of dedicated practice to be able to train the body and mind to be in this state continuously.

The deeper purpose of asanas

Asanas were developed by the monks centuries ago. These monks practiced strict self-control to master the senses and mind. Their goal was to reach the state of Samadhi and ultimately the state of Enlightenment.

These monks used to eat once a day, one handful of food. And drink one handful of water once a day. They used to sleep only for four hours and they practiced at least eight hours of meditation every day.

But due to the sedentary lifestyle (the prolonged stillness due to meditation practice), their bodies were getting ill. Their internal organs were functioning poorly and illness was inhibiting their meditation practice. These monks could not practice regular exercise, swimming, running, etc. because it made them very hungry, thirsty and tired. With their wisdom and insight, they invented asanas to provide exercise to their internal body (organs and glands) while avoiding unwanted effects of the physical exercise.

Therefore, they developed asanas where they would only stress the targeted organs without moving or stressing the unnecessary muscles. They wanted to conserve energy even while exercising their internal organs. They applied what is also known as the principle of “Minimal Action”.

So, the main purpose these ancient monks developed asanas was to keep their internal organs fit and maintain good health. They practice a limited number of gentle asanas. Later this practice was further expanded by Natha tradition monks who began to practice more extreme asanas.

Yoga asanas and the principle of minimal action

This ancient approach to asana practice is in sync with a law of nature, known as the Principle of Minimal Action. An example of the principle is when you try hard to stay on the surface of the water, you sink. When you relax and give up, you float.

It is one of the most fundamental principles of nature, and all of nature acts according to this Principle of Least Action, as it is called in physics. Mathematicians formulated the principle during the first half of the 17th century. They observed that light travels at different speeds through different media and that light always chooses the path that takes the least time. How does the light know which path to take? They understood that nature will always follow the path that requires the least amount of energy and time. In fact, nature aims to conserve energy.

The Chinese also observed the same principle and called it Wu Wei (minimal action). Wu Wei lies at the basis of Tai Chi and Kung Fu. It refers to the cultivation of a state of being in which our actions are quite effortlessly in alignment with the ebb and flow of the elemental cycles of the natural world.

The same principle lies at the foundation of yoga asanas. You practice each asana most naturally when you ease into it with the least physical and mental effort. In this way you remain in sync with your own nature and the large flow of nature all around you. When you practice Hatha Yoga and your body is in a restful and regenerative mode, you are acting according to the most basic and natural principle of the universe. You thus act in harmony with the totality of natural law.

Practicing asanas in accordance with the principle of sthira sukham asanam has an incredibly balancing effect on the nervous system. When the body is balanced, it is in a state of homeostasis. Homeostasis means that there are relatively stable conditions in the internal systems of the body, despite influences from the inner and outer world. The autonomic nervous system maintains this balance.

Only one of these subsystems (PNS or SNS) can be active at the same time. They alternate depending on the circumstances. For this reason, long holds during Hatha Yoga practice are essential. Holding an asana with comfort and ease for a certain duration brings you into the rest-and-regenerate mode. Not all asanas are easy and effortless, though. Challenging asanas raise your heartbeat and respiration rates. When followed by a relaxation pose such as Corpse Pose, Child’s Pose, or Crocodile Pose, however, your body learns how to shift from sympathetic to parasympathetic modes. An effective yoga practice involves poses and exercises that cycle through the accelerator and the brake so the autonomic nervous system gets a thorough workout. It is very important for the healthy functioning of your body that you can switch between activation of the PNS and SNS.

In sthira sukham asanam, you learn to alternate between conscious activation and relaxation of your body. Therefore, keeping this principle in mind as you practice, you can effectively balance your nervous system and maintain homeostasis.

How to Apply the Concept of a Steady & Comfortable in your Practice?

The benefits of a practice built on a foundation of the principle of sthira sukham asanam are manifold. Such a holistic asana practice is a balanced practice because it creates harmony
between the physical, mental, and energy bodies.

To use the meaning of sthira sukham asanam in your practice:

Do not confuse the meaning of sthira sukham asanam with:

A common mistake for yoga practitioners is the image- and goal-oriented attitude of perceiving the picture-perfect posture as the goal. We must not forget, however, the basic principle that the asana is achieved naturally, through simple harmony between body and mind. Practicing asana with comfort and steadiness leads to control of the body, mind and the senses, ultimately helping us along on the path to the purpose of yoga: self-realization. Understanding and applying these foundational principles of yoga will help you to advance in your own practice and will result in an overall increase of physical well-being.

For more than twenty years Ram Jain has served as one of the important contributors and educators in the field of yoga, meditation, and philosophy. Throughout his career Ram has trained more than 5000 yoga teachers from all around the world. Born and raised in India in a traditional Hindu family, Ram was sent to a Vedic school for his formal education. He studied Sanskrit, Yoga, the Vedas & Upanishads from the age of eight years from traditional teachers. He has also studied modern yoga styles with Western teachers such as Paul Grilley and David Swenson. In 2009 – after an eleven-year career as a yoga teacher – he founded the Arhanta Yoga Ashrams in India & in the Netherlands, which offer professional yoga teacher training programs in India and Europe.

How to Practice Restorative Yoga – Complete Guide to the Practice & Benefits

Hypnotherapy for Healing and Prosperity