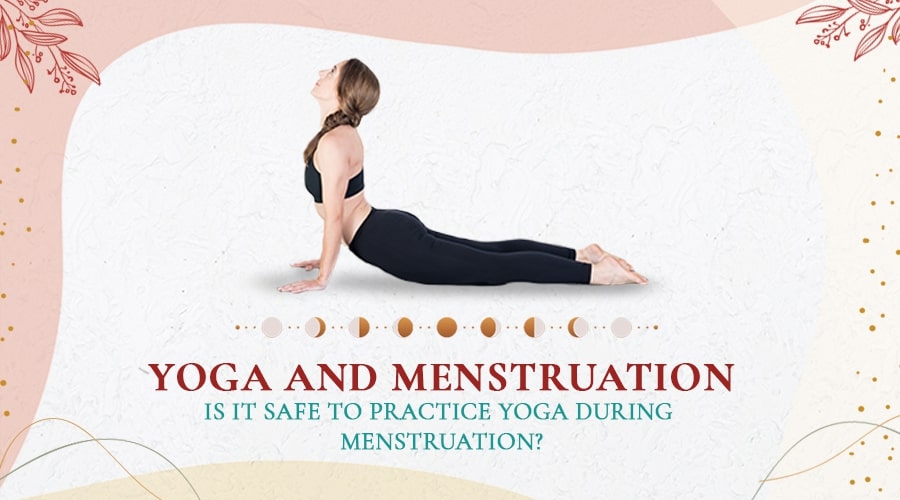 Does yoga affect one’s menstruation cycle? Can you practice yoga when your periods are on? For a long time, such questions have influenced practitioners and their approach to yoga. Getting to know how yoga works on our body can help you better understand what is the myth and what is the reality.

Let’s take a closer look at this.

As a yoga teacher, you will often be asked if it is okay to practice yoga during mensuration. Many students are taught that practicing yoga poses, especially inversion, during the menstrual cycle is unhealthy and unsafe and that it should be strictly avoided. On the other hand, there are many yoga instructors who say that doing inversions during menstruation is not a problem at all. Yoga teachers and yoga teacher trainers are quite divided in their views about this topic.

Yoga and Menstruation: A Cultural Stigma

Cultural taboos surrounding menstruation have long influenced people’s perspectives. Traditionally, it has become a rule of thumb that a woman’s body during menstruation is ‘unclean’ and unfit for certain activities. As such, they were forbidden from engaging in social events or religious practices.

Considering the fact that yoga emerged from a religious, and socio-cultural background, it inevitably became a part of this cultural stigma.

Why do certain yoga schools and traditions advise against practicing yoga during the period?

The great division of opinions on the question if it is safe to practice yoga poses with inversion stems from a cultural stigma in India, the birth land of yoga. The belief that during menstruation, a woman is in a cleansing period and should not participate in any spiritual practice is very dominant. In earlier days, and in some rural villages these days still, menstruating women were seen as very impure. They weren’t allowed to engage in prayer or any other religious activity. Entering a temple while menstruating was considered to be a sin, and it was even common that women were asked to leave their home and stay in a hut outside their village for the duration of their menstruation.

That woman should not practice yoga during their menstruation, therefore, becomes a logical conclusion, if you were to be influenced by this stigma.

Remnants of this cultural view on yoga, can be found in most of the yoga traditions. B.K.S. Iyengar’s school of yoga forbids inversions during menstruation. And in the Ashtanga Vinyasa School created by Sri K. Pattabhi Jois, women are encouraged to take a break from practicing yoga during the “moon days”. Countless other schools of yoga are either strongly against or undecided as to whether practitioners should practice during their periods.

Yoga and Menstruation: A Health Perspective

While difference of opinion may exist regarding women’s ability to practice yoga during menstruation, it is still a scientifically proven fact that yoga does improve our health. Deep breathing practices, meditation, and gentle yoga poses that emphasize on stability and flexibility alleviate many of the problems that women general tend to experience during their monthly cycles such as cramps, weakness, nausea, or emotional symptoms like anxiety, irritation, mood swings etc.

Concentrated breathing, and body alignment through gentle, focused movements allows better oxygenation throughout the body, and with regular practice, yoga can improve a woman’s menstrual health.

Menstrual cycles are like a barometer of your hormonal health. If this harmony is disturbed, your menstrual cycles will let you know in different ways. That is the reason why irregular menstruation and severe menstrual symptoms may indicate hormonal problems. In the short run, these changes do not pose any threat, but if you keep on neglecting these signals, you stand a higher risk of developing some serious complication or disease later on.

For example, very heavy bleeding may lead to iron-deficiency anemia. Some women may notice a worsening of symptoms of certain diseases like asthma or autoimmune conditions. Others stand a higher risk of developing mood disorders like depression. Prolonged cycles may indicate PCOS (poly cystic ovary syndrome), which could lead to infertility. It may also increase the risk of developing diabetes.

If irregular periods or other problems with the menstrual cycle are frequent, one should seek medical attention and avoid strenuous exercise.

In case of any of the following irregularities occur frequently, you should consult a health care professional at the earliest:

Is yoga during menstruation a health risk?

Even though the stigma on impurity has somewhat been watered down by the Western influence on yoga, it continues to be quite prominent. In many yoga classes and yoga teacher training programs, students are told that even though it is okay to practice some light and Yin inspired yoga poses, they should definitely avoid heavy practices and inversions. Students are told that a more vigorous practice, including advanced yoga positions and inversions, might slow down the cleansing process and have an adverse effect on their health.

Yoga inversions cause retrograde menstruation and endometriosis – Is it true?

The myth that inversions might trigger the onset of endometriosis is common in the yoga community. The thinking goes that during inversions, gravity will pull the menstrual flow away from your vagina and towards the Fallopian tubes. This, in turn, is believed to increase the risk of retrograde menstruation, and therefore, endometriosis. So if you want to keep your menstrual blood flowing downwards and out of your body, you don’t want to physically turn your uterus upside down, right?

Endometriosis is a medical condition in which the lining of the uterus called the endometrium grows in other places such as the Fallopian tubes, ovaries, or along the pelvis. When that lining breaks down like the regular lining in the uterus that produces the menstruation, it has nowhere to go. This causes cysts, heavy periods, severe cramps and can even lead to infertility.  The cause of endometriosis is unknown so far, but it is generally believed to be caused by immune problems or a genetic disposition.

The thesis that an inverted uterus during the period causes endometriosis is not correct and has been discarded by the medical community on the basis of two reasons:

Similarly, the natural downward flow of menstruation will not reverse directions if you stand in a headstand. In fact, even in the zero gravity of space, where there is no ‘up’ or ‘down’, the direction of menstrual flow for astronauts has remained unchanged.[3]

Is it safe to practice inversions while menstruating?

Just as no one alignment cue fits all in a yoga practice similarly, no one advice will fit all women in this situation. Most women feel different when they are menstruating. Many women experience tenderness in their lower-backs and bellies. Some women experience dizziness, nausea and mood swings, and most women generally feel less energetic than normal. If you experience these kinds of mild symptoms, you might want to adapt your practice and skip the inversions and heavy exercises. Remember, you are supposed to feel better after your yoga practice, not worse!

But also remember that menstruation is a normal physiological process, and yoga or other physical activities are even recommended during periods. Regular practice of yoga might help your body feel more comfortable during the monthly cycles. It can ease menstrual cramps, reduce irregular periods, and improve our physical and mental health in several other ways.

So if you are feeling fine and you do not have the aforementioned condition of endometriosis, you can certainly practice yoga during menstruation, including all the inversions.

Benefits of Yoga during Menstruation

Yoga improves our hormonal health, and alleviates many common symptoms of menstrual health problems. When we start making yoga a part of our daily activities, it boosts both our physical and mental health, and brings an overall improvement in our quality of life.

She has also co-authored the internationally acclaimed book Hatha Yoga for Teachers & Practitioners: A Comprehensive Guide to Holistic Sequencing.

Complete Guide to Mudras: Benefits and Use in Yoga & Meditation

The Essential Guide to Continuing Education for Yoga Teachers