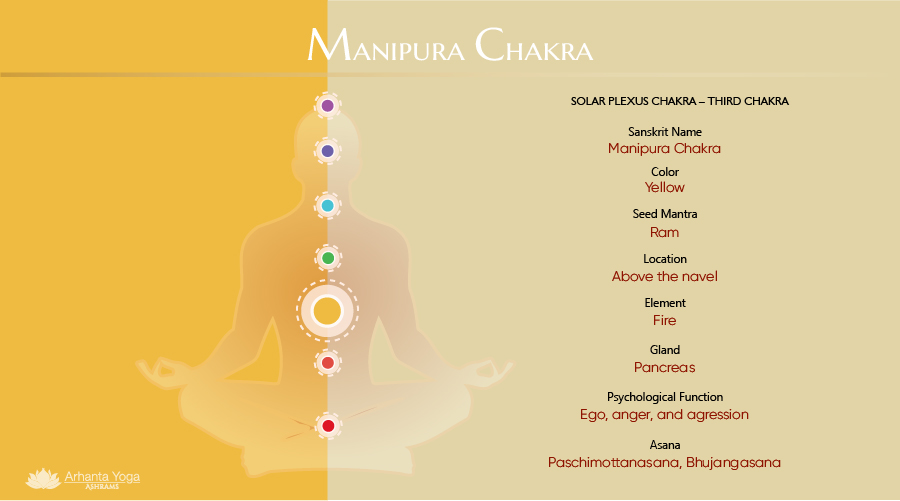 “Manipura” means a lustrous gem. The jewel or qualities associated with this chakra strengthen the digestive system and diaphragm. The Solar Plexus focuses on the power and autonomy of metabolism. The element for the Solar Plexus is fire. Activating the fire within moderate body temperature helps in food digestion. It represents the color yellow that brings brightness and balance of energy.

When the Solar Plexus Chakra is in balance, a person experiences confidence is self-motivated and has a sense of purpose. When surrounded by negative energy, he or she can suffer from low self-esteem, feel troubled making decisions, and have control issues.

Imbalances of the Solar Plexus can also cause fatigue, overeating, excessive weight gain especially around the stomach, digestive system disorders, hypoglycemia, and diabetes.

The Characteristics of the Manipura Chakra

The energy of the yellow color

The color associated with the third of the seven chakras, the Manipura Chakra, is yellow. This color symbolizes energy, intellect, and also the connection a person has with the Fire and Sun. The color yellow also represents youth, new beginnings, birth, and re-birth. Yellow connects us with knowledge and intellect. People who are drawn to the color yellow are interested in intellectual pursuits.

The element of fire

The associated element of Manipura Chakra is fire. It is also known as representing the energy of the sun. The element fire ignites the light of consciousness that motivates us to strive towards success and good health. Spending too much time in the third chakra can cause burn out. However, not developing it can leave a person feeling weak, fearful, and inert. The feelings of love and happiness that we feel in our hearts actually originate in the Solar Plexus Chakra and rise from there to the Heart Chakra.

The fire energy of the Solar Plexus Chakra is very important in digestion and in promoting efficient absorption of nutrients.

The fire element is represented in the body as heat or Agni in the solar plexus. At the center of the physical and astral body, the Manipura Chakra attracts prana and manages this life energy in order to balance the body and mind. Excessive fire, excessive energy in the Solar Plexus Chakra can create impulsive reactions such as anger and aggression which is a sign of blocked chakra.

Signs of a Blocked Manipura Chakra

When the Manipura Chakra is out of alignment, digestive issues arise. This can show up as improper processing of nutrients, constipation, or irritable bowel syndrome. Eating disorders, Ulcers, Diabetes, issues with the pancreas, liver, and colon are some of the symptoms of imbalance in this energy center of Manipura Chakra.

An imbalance can also cause severe emotional problems. Starting with doubt and mistrust towards the people in your life, continuing with a lot of worries about what others may think about you.  Some people may experience low levels of self-esteem, searching for continuous confirmation and approval from others. This imbalance may lead to unhealthy attachments to people in your life.

Activating Manipura Chakra cultivates a willingness to gain insight into an understanding of power, individuality, and identity. In some people, a misaligned Solar Plexus Chakra can make skillful self-expression challenging. In some, it manifests as overly rigid or controlling behavior. In others, it breeds a victim mentality, neediness, and lack of direction or self-esteem to stand up and take positive action.

When the Manipura Chakra is in healthy alignment, it removes insecurity. This leads to recognizing inherent power and feeling empowered. Connecting with a strong purpose in life gains a deeper understanding of the individual contributions to achieving success. This brings prosperity in personal and professional life. Letting go of negative things becomes easier since dependency on others is reduced. There is a marked improvement in recognizing self-worth rather than focusing on material things. This positive transformation is brought by consistent practice to investigate and identify the symptoms of blockage.

A well balanced Solar Plexus Chakra enables us to effectively plan and achieve success.  Cleaning and opening this chakra can make a person a better leader and create an inspiring life.

Yoga for balancing the energy of Solar Plexus

Some healing practices for this Chakra involve physical activities like starting a yoga practice or any other exercise that involves body movement.

As the element of the Solar Plexus Chakra is fire, the Sun provides healing energy. Exercising or walking outside for at least 20-30 minutes of sun every day. If you cannot go outside, try to visualize the sun, feel its warmth, light, power just lighting you up inside; watch it fill every space, every cell.

Yoga poses that activate the Manipura Chakra are:

This forward bending asana is one of the most beneficial asanas for the digestive process. This stimulation is caused by the improved blood circulation and restores the best functional capacity to the liver, spleen, pancreas, and intestines. Practicing Paschimottanasana, therefore, increases digestion and prevents constipation. By activating the Manipura Chakra, the body becomes more effective in absorbing nutrients into the body.

This back-bending asana generates an enormous amount of intra-abdominal massage to the various organs of the digestive system particularly the liver and pancreas. The stimulation of the solar plexus in this pose contributes to digestive efficiency and the effective elimination of wastes and toxins from the body. The extension of the neck stimulates the thyroid glands prompting the healthy secretions of hormones, which improves metabolism for ideal body weight management.

This gentle twisting pose stimulates the digestive system, the liver, and gall bladder and therefore enhances detoxification and improves digestion.

The Manipura Chakra is the center of fire or Agni. The fire element burns the negative to manifest and sustain the positive. A balanced energy center contributes to the physical, mental, and emotional wellness. Identifying and practicing the above-mentioned methods helps to balance the third chakra and also promotes success and longevity.

Ram Jain (E-RYT 500) is a renowned yoga teacher from India and the Director of Arhanta Yoga Ashrams in India and The Netherlands. He has been teaching since 1998 and he is teaching yoga teacher training courses since 2009. In the past 10 years, he has trained over 6000 yoga teachers. Ram is also the creator of several online education courses, such as the 50 hours Online Yin Yoga course, the online Yoga Philosophy course, and the online Ayurveda course. Born and raised in India, his yoga education started from the age of 8 years as part of his school education. Over the period he has studied yoga and yogic philosophy in-depth from various reputed teachers.

Ram Jain is also the author of the internationally acclaimed book: Hatha Yoga For Teachers & Practitioners: A Comprehensive Guide to Holistic Sequencing

Why You’ll Live Longer and Better with Breathwork & Pranayama

Yoga and Pranayama for Asthma Relief

Hypnotherapy for Healing and Prosperity